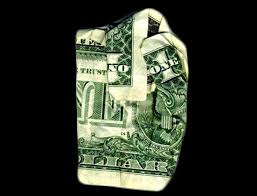 I’m not going to take credit for this idea. I heard it from Stan Endicott at a National Worship Leader Conference, where we both were speaking… Stan, unavoidably, was unable to teach his scheduled classes one day so I was asked to teach them for him, and attended the classes that Stan taught while he was there. Hopefully that clears up the rabbit trail of giving credit where credit is due…

He carries a wadded up one dollar bill in his pocket at all times. Once a week, he gives that dollar away to someone who has gone the extra mile, or needs encouragement, or has done something selfless, or, in one case he described, in order to calm someone down. He makes a big flourish of presenting the dollar. He pulls it out of his pocket, and snaps it taut so that everybody around can hear it. In the giving, he explains to the recipient just exactly why he’s giving them the dollar.

He might give it away during rehearsal…or on the weekend to someone not a part of his ministry team. But since he’s been doing this for years, the gift of the dollar has taken on a sense of value far beyond monetary. According to Stan, most people don’t spend the dollar. They’ll take it home and put it on the refrigerator, or frame it, or carry it around and tell their own story about getting it.

Such a simple thing. Such a small cost. Such a big impact.

I wish I’d thought of it. Now that I’m writing about it, I’m not sure I can do it in my own situation, but I think it is a great idea.

Do you employ motivational techniques like this one? Do you think Stan’s idea would work in your situation? I’d love to hear what you think. Please leave a comment.