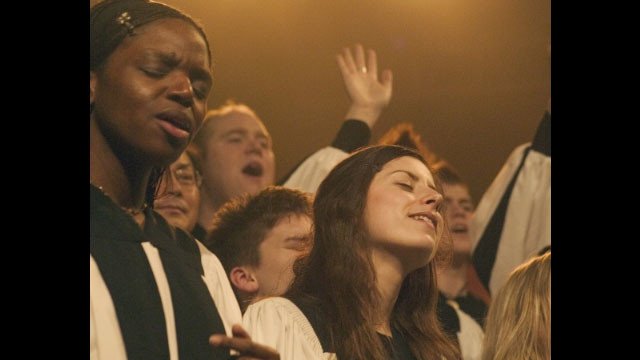 One of the most popular articles at Creator's website is Joyful Noise. If you haven't read it, click at the end of the previous sentence. I highly recommend it, even if I am a very close relative of the author. It was written several years ago, in part because I was asked to pre-screen the movie of the same name for review purposes. If you did read the whole article just now, you'll probably want to skip ahead a bit, but for those who haven't or "it's been a long time" let me highlight a few things.

"...the institution of the church choir, and the joy of singing in such a choir, has been under attack across the US almost continuously during and since my time at that church. Let me count some of the ways:

Choirs became the casualties of a double edged sword: The more people (especially marketers trying to sell "hip" new products to the leadership of "contemporary" churches) said to church leadership that choirs didn't belong in the church, the more churches shifted resources away from choir ministries. As more and more resources were shifted away from choir ministries, those that participated in those ministries became increasingly marginalized. The more marginalized those that participated in choir ministries became, the less influence they had on leadership. Choirs became an "endangered ministry." Choir ministry leadership abandoned the churches in droves. Twenty plus years later, there were many towns and cities in America in which choir ministries were hard to find, if not completely gone."

Then the good news...

All of a sudden, in the last year or so, choirs seem to be everywhere:

And, believe it or not, in spite of all the efforts to do eliminate them, choirs are still found in the church.

According to a study done by Chorus America, there are more than 32.5 million church choir members across the US. To put that into perspective, that is roughly equivalent to the population of the state of California. Those singers show up every week, and every week they make a significant joyful noise.

Then some reasons why it seems impossible to kill off church choirs...

Recently I came across an interview with Carol Cymbala, director of arguably one of the most famous American church choirs: The Brooklyn Tabernacle Choir (for some interesting trivia, read 7 Facts about the Brooklyn Tabernacle Choir You May Not Know). In the interview, she says some wonderful things about church choirs that I feel are useful to pass along (thanks to Gina Adams for bringing this to my attention).

Why do you believe choirs are still important to church worship?
"I must say that I am a little biased because all the work I've ever done has been with a choir. I do feel strongly that the idea of many voices lifted up to the Lord, unified and in harmony, is a powerful thing. Just recently, we hosted a music conference at our church where over 1000 voices came together, and it was so powerful and overwhelming hearing those voices lifted in praise to God."

What can choir directors do to motivate their members?
"Choir directors have to remind the choir members the reason why they are singing. Using our church as an example, I can say that the choir is in the church to glorify the Lord and lead people into the presence of God. It's just not singing alone. It's also being able to minister personally to those hurting or in need of Jesus."

What advice would you give to music ministers to make their choir program vibrant and integral to church services?
"The purpose of a choir is to lead the congregation into the presence of God. Prayer is vital. Preparing the choir spiritually is so important. We emphasize prayer at every rehearsal, remembering that our goal is leading people into the presence of God. It's a constant remembering of our purpose in this ministry. We are singing to lift up the name of Jesus, and when we think about all He's done for us, how excited we should be to lift up His name!"

As I said in the original article...

We at Creator have never forgotten that choirs have been an integral part of music and worship ministry for over a thousand years. Even though choir ministry has been under attack, we believe that the stylistic pendulum has begun to move back, and that choirs will be a significant part of music and worship ministry as we go forward in the twenty first century. We intend to continue to provide resources for those involved in choir ministry, both singers and directors, both in our magazine, and here at creatormagazine.com.

If you agree, I encourage you to lift your voice and make a joyful noise.