My training is in music. I began playing the piano, and taking lessons, at 4 years old. According to my mother, I came home from a neighbor’s house where my friend’s mother was giving him a piano lesson, and said “I want to play the piano.” Little did I, or my parents, know what that started.

The first big turning point happened when I was 10 (a few years before this picture was taken…I’m the tall thin one doing the fig leaf, with my piano

teacher and another student doing promo for my “Tenth Year” Recital). At the other end of a phone call, a friend invited me to play in a rock band that would open for Clyde McPhatter. I got one lesson in playing in a band from a guy who played at the clubs at Lake Tahoe (we were borrowing his Wurlitzer electric piano), and my friend and I (plus a couple of other guys) went on in front of 5,000 screaming teenagers. I also got paid $50. Those two things got my attention.

So I worked my way through high school, playing multiple nights a week at high school dances, in clubs, and doing piano bar. I even went to college as a piano major. 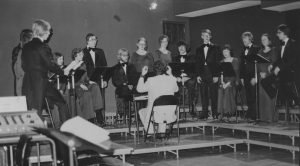 Along the way I discovered a call to be a conductor (that’s my back conducting my Canadian university chamber choir at a national choral event). While the first inklings of it came as a high school senior, my training developed in college. The second big turning point came at the Aspen Music Festival, where I attended on a Rockefeller grant.

My conducting teacher there, John Nelson (he’s on the right), literally changed the course of my life by teaching and modeling discipline to the craft of music, commitment to excellence in the preparation and delivery of music, and finding the heart of what the music could communicate to the audience.

There have been a few unexpected musical excursions, too. 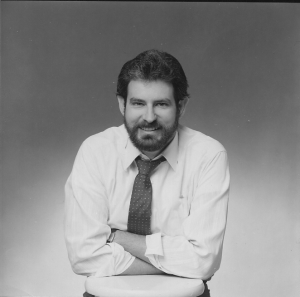 My first published musical composition pushed over a domino that led me to becoming the managing editor, and eventually owner, of a music publishing company. Being asked to do conducting workshops led to the writing of my first book. A phone call from a friend resulted in my purchase of a magazine for church musicians. The young man in the picture there is my official “glamour shot” when I was working as an administrator for a non profit organization dedicated to integrating the arts into worship. Then there was the stint of forming one of the first vocal jazz groups in Canada…sponsored by the Molson Brewery!

The constant thread, though, was playing the piano. Even though I’m officially “retired” (by my family’s count, I’m on my fifth try at that), playing is a large part of my role as Director of Music at churches in the US and Canada.

And, after all these years, in early 2018, my first solo piano album was released on the Flying Cherubs label. It is one uninterrupted take, with no overdubs and no punch-ins. It is representative of the kind of set I might play for a cocktail piano gig. I say representative, because a lot of what is on this album is improvised, and I had no idea what I was going to play until my hands came down on the keys (well…I had an idea, but you understand what I mean). There was a set list, and so you may recognize a number of standards (and other tunes) along the way. To order a CD copy of the album, just click here. To order a download of the album, just click here. Here’s a short sample…