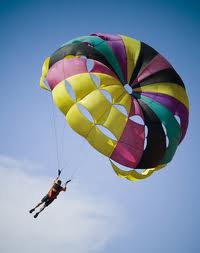 I come from a family that keeps stuff. We're not hoarders by any means, but we tend to accumulate things. In other news, in my family, I'm the one who has moved the most. Everytime I've moved, that accumulation of things has moved with me, much to the delight of the movers (that was sarcasm, folks...).

What does that have to do with anything? Because my family is also prone to periodic bouts of "cleaning up." Dents are made, piles are reduced, and a good feeling is shared all around. But, as the old saying goes, you expand to fll the space you occupy, so it is an ongoing battle.

Which is an intentional segue. In a recent bout of going through things that might be ready for the shredder, I came across a print out of an email I got from a cousin in 1998. The heart of the email was a story, which I'm going to share with you in a minute. But when I sat down to write this article, it occured to me, is the story an urban legend? Even if it is meaningful and motivational, is it true?

So I unpacked my trusty google.com and, sure enough, my cousin's email story was a slightly altered version of an excerpt from a book. Interestingly enough, the author's own website doesn't make clear the title of the book, only that the story is from chapter 16. There's a lesson there. The story is great, and it makes me want to read more. But the medium (the website) isn't helpful. It doesn't point me to where I could find "more." It's kind of like some churches that I've seen and heard about over the course of my career. Good message, but no thought to how to help someone who wants more. No planning for the best possible outcome. I point that out, because of the irony, given the story, which is about details, and making sure that they are taken care of.

I'll have more in a bit, but first, here's the story, as excerpted from the unnamed book...

Recently, I was sitting in a restaurant in Kansas City. A man about two tables away kept looking at me. I didn't recognize him. A few minutes into our meal he stood up and walked over to my table, looked down at me, pointed his finger in my face and said, "You're Captain Plumb."
I looked up and I said, "Yes sir, I'm Captain Plumb."
He said, "You flew jet fighters in Vietnam. You were on the aircraft carrier Kitty Hawk. You were shot down. You parachuted into enemy hands and spent six years as a prisoner of war."
I said, "How in the world did you know all that?"
He replied, "Because, I packed your parachute."
I was speechless. I staggered to my feet and held out a very grateful hand of thanks. This guy came up with just the proper words. He grabbed my hand, he pumped my arm and said, "I guess it worked."
"Yes sir, indeed it did", I said, "and I must tell you I've said a lot of prayers of thanks for your nimble fingers, but I never thought I'd have the opportunity to express my gratitude in person."
He said, "Were all the panels there?"
"Well sir, I must shoot straight with you," I said, "of the eighteen panels that were supposed to be in that parachute, I had fifteen good ones. Three were torn, but it wasn't your fault, it was mine. I jumped out of that jet fighter at a high rate of speed, close to the ground. That's what tore the panels in the chute. It wasn't the way you packed it."
"Let me ask you a question," I said, "do you keep track of all the parachutes you pack?"
"No" he responded, "it's enough gratification for me just to know that I've served."
I didn't get much sleep that night. I kept thinking about that man. I kept wondering what he might have looked like in a Navy uniform - a Dixie cup hat, a bib in the back and bell bottom trousers. I wondered how many times I might have passed him on board the Kitty Hawk. I wondered how many times I might have seen him and not even said "good morning," "how are you," or anything because, you see, I was a fighter pilot and he was just a sailor. How many hours did he spend on that long wooden table in the bowels of that ship weaving the shrouds and folding the silks of those chutes? I could have cared less...until one day my parachute came along and he packed it for me
So the philosophical question here is this: How's your parachute packing coming along? Who looks to you for strength in times of need? And perhaps, more importantly, who are the special people in your life who provide you the encouragement you need when the chips are down? Perhaps it's time right now to give those people a call and thank them for packing your chute.

First, if you'd like to know more about Charlie Plumb, his website is charlieplumb.com, and for a low 5 figure fee, he will come to your event and tell this story in person. I'm sure that would be worth it, given that there's more to the story. Charlie, you see, was a POW for 6 years, serving part of that time as the Chaplain for the men together with him in the camp.

I would generally at this point reinforce the parachute packing life analogy. But there's more...

In the mail this week, I got a review copy of a what I think is a great book -- From Memory to Imagination: Reforming the Church's Music by C. Randall Bradley. In the book, Randall talks about memory as something that we all carry around...a parachute if you will. The memory parachute (that's my term, not Randall's) is something that can be really useful when you are navigating through uncharted territory. It can slow your progress to a safe speed, and keep you aloft until you find a safe spot to land.

But a memory parachute can also be a drag...literally. Ever seen a drag race? Guess what they use to stop those screaming machines after the quarter mile mark? A parachute. In the dragster's case, a parachute is something that keeps you on the straight and narrow...in our case, away from Bradley's other important aspect of leadership and ministry: imagination. Without imagination, he says, we are doomed to either keep repeating our memory in order to remind us of something that was meaningful at some point in the past, or complain about not having our memory repeated, because... well, you can fill in the blanks.

Imagination without memory, Bradley says, is dangerous, because it means that you have to constantly reinvent everything. There is no frame of reference except new (which, in many institutions, is spelled h-i-p).

Memory without imagination, on the other hand, is dangerous, because the memory becomes, as Chris Alford has pointed out, the idol, or, perhaps one should say the "ideal." Sooner or later, the memory can get farther and farther away from the original reality, and, by holding fast to the memory, you become, at the very least, wary about the future. The future in which everyone will live tomorrow.

So, I ask you, not in Plumb's philosophical way, but in practical leadership and ministry terms: what are you packing around? Is it a parachute of memory, or of imagination? Either one may be serving you well now...as far as you know...but I venture to say that it may be time to "clean up" by getting a new parachute. I think we would all be well served to go forward with a parachute of imagination packed by someone with memory.

4 Replies to “What Are You Packing Around?”