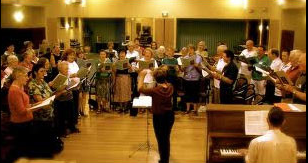 Starting at the Beginning...what do you do first?


We've established elsewhere that church musicians move more often than is ideal for the development of continunity and a mature program. It is a familiar theme, and there is no need to further address it here.

Except that moving means starting over. I've been asked so many times, "What do you work on first?" that I decided it would be a good topic for this article. What follows is mostly choir-specific, but many of the same principles apply to a worship team, handbell ensemble, or church orchestra. I'm sure that my system is not the only way, and it may not be the best way to begin with a new group. It has worked (many times!) for me.

Ensemble is 80% of the battle

Whether you direct a choir, a worship team, or a liturgical dance ensemble, a group of people attempting the same task have more impact if they work together. It seems so simple, but if the dancers' feet don't come down at the same time, or the worship team players can't sync with the drummer there is an ensemble problem. The most common result of an ensemble problem is messy sound. Fixing ensemble problems cleans up the sound, and, by extension, the communication. When working with a new group, the director must evaluate and fix ensemble problems quickly, or all the attention to tone, "sound," style, and almost anything else you can think of, is lost in the sound mess.

Again, this will sound so simple, but fixing ensemble problems comes down to getting everyone to play and/or sing together. That involves, at the macro level, starting and stopping together. At the micro level, it means starting and stopping any particular musical event (like an attack, or a rest, or a phrase, or a word, or a syllable) together. There is more to it than that, obviously, but just getting an ensemble to start and stop together fixes a whole lot of the problems.

How do you do that? Let's take the worship team. If the rhythm section (bass and drums, plus keyboard and/or guitar) is not together, the rest of the players have no hope of being together. Geographical proximity helps enormously. Put the bass player and the drummer close to each other, and position them so that they can make eye contact (in fact...position the whole group so that they all can maintain eye contact). Put the keyboard right there, and the rhythm guitar too. Teach everybody to listen, and start with something simple: playing whole notes, or a straight quarter note pattern. Once they can do that consistently, then add more instruments, and/or more rhythmic variety.

Singers present more complexity, because they deal with words.

Again...it is simple, but words are made up of vowels and consonants.The cardinal rule is that vowels sustain tone, and consonants interrupt tone to articulate text. Starting and stopping a group of singers together is critical to making the text intelligible. Teach the singers to work together by establishing general rules. One of those rules might be that all initial consonants come before the beat, and all final consonants are placed on the following beat. For instance, applying this rule to a word like "beat" gives this picture: b|ea|t. The "b" comes before the beat, the "ea" sustains during the duration of the note, and the "t" is placed on the next beat.

Of course it is more complicated than that, depending upon whether or not our test word "beat" is followed by another word, or a rest, the speed at which the music is moving, and other considerations. We'll talk about the vowels in a bit, but the first step is to get the consonants together. That can be a challenge for many singers in a group situation. Try taking the vowel out of the equation at the beginning, and just practice putting our test "b" and/or "t" together. A simple exercise of alternating "b"s and "t"s at regular quarter note intervals will give ample opportunity for practice of this general rule.

Once your ensemble can start and stop together, the next step is to be able to make music in the space in between those events. For a handbell group, the attacks and damping are, in a sense, the hard parts...the easy part is letting the bell ring. It is similarly true with singers. There is just one problem with vocal groups, however: if the vowels are not all the same, the lack of uniformity will cause pitch, color, and other problems.

So while you are teaching your singers to start and stop together, work with them to sustain the same vowels together. I have my own system for that, which I'd be happy to share with you, but it doesn't translate easily to prose. I do demonstrate this at various clinics, choir retreats, and workshops around the country. Email me at the link below to ask for my schedule, or plan for me to visit your church to work with your groups.

The system is not as important as the consistency and uniformity, however. No matter how you choose to have your choir pronounce their vowels (the IPA is a great guide for pronunciation), you will need to work on the singers' ability to consistenly arrive at the same vowel at the same time...and hold it for the same amount of time.

My undergraduate choral director hated F major. His reasons were understandable: for a choir to sing in F major, all the singers in all the sections regularly have to navigate across a typical voice's break. That means regular shifts in color, and a multiplicity of vocal production issues. Combine that with the fact that most editions of early (renaissance) music (and "simpler" music for less accomplished choirs) are "conveniently" place in F major in order to print the least number of ledger lines, and you have a recurring vocal nightmare of sorts. It was his contention that most choirs simply could not sing a piece in F major in tune over a long period of time.

During the course of my conducting career, I have had ample opportunity to prove the validity of his theory. And I've spent a lot of time thinking about whether or not it could be solved, and if so, how to do it. I eventually turned to what I'll call the "Tary Nixon" phenomena. Tary was a fraternity brother of mine at Northwestern University. He was not a music student. But he had played the string bass in his high school orchestra. And Tary could sing an A440 at will and upon command. He claimed it was from listening to the oboe player during the tuning process every time the orchestra rehearsed. So I decided that if a choir couldn't sing F major in tune, we might be able to solve that problem by "tuning" to F major at every rehearsal.

So...for many years now, I've used a simple closed-position F major chord in my choir warm ups. Basses sing the F below middle C, tenors on middle C, altos an octave above the basses, and sopranos a third above the altos on an A. I use this chord for double duty: the primary, but never stated, purpose, is to get F major in the choir's ears. The second purpose is to sustain vowels and teach the singers to listen and match each other's vowels.

I generally start with an "oo" simply because it is easy to sing quietly, which assists in teaching listening skills. Starting from the "oo" is a decision based upon years of trial and error, though. For years, I started with "ah" because it is an open vowel, and the easiest for most singers (well...depending upon the geography of your singers' origins, of course...). During this exercise, I try to spend most of my time (after centering everyone on the "oo") on the vowel that is most prevalent in the first piece I'm going to rehearse. The "ee" vowel is frequently visited, because I've found that the "ee" is the hardest for an amateur singer to control, chorally speaking.

Over the course of a few weeks or months, every choir I've worked with can "find" that F major chord without having it played for them on the piano. This is very helpful in the course of rehearsing any amount of a cappella music, because if things go wrong, you can train the choir (by using the F major reference chord) to reposition by relating what they are singing to their F major touchstone. In fairness, you may want to use a different chord. Fine. No problem...it is the principle that I'm trying to share with you.

So that's what I start with: an F major chord to work on vowels, and some basic rules to establish the placement of consonants. It has been my experience that no matter the state of a choir's discipline in these two areas, there can always be improvement, and the improvement happens very quickly. In a church choir, I can generally demonstrate discernable improvement in a choir's communication, intonation, and clarity in less than a month...and I mean discernable to the average congregant. It is a useful "quick start" or "quick fix" that can set the tone for a director's acceptance by choir, congregation, and pastor, and pay dividends--in many other areas of music--long after the disciplines are established.

For more help in the area of choir development, I encourage you to go here.